The Glebe in Chelsea may be London’s most luxurious development

For the past decade, London’s One Hyde Park has reigned supreme at the top of the residential property ladder. Many believed that this 86-unit Knightsbridge development, which opened in 2011 during the pre-Brexit prime London boom, could not be bettered in terms of location, design or standard of finishes. But now that crown looks set to pass to another London development that you’ve probably never heard of.

The Glebe is a former Victorian school sitting on an acre of land in the oldest part of Chelsea, between the King’s Road and the River Thames. Ten years in the making, this secluded development is quietly nearing completion as a gated compound of just eight residences ranging in size from 5,000 to 15,000 sq ft (there is a separate 21,000 sq ft townhouse on the adjacent Old Church Street). The homes have been discreetly selling throughout the pandemic, with Land Registry records revealing that a detached villa sold for £43 million in April.

What’s remarkable is that if you didn’t know the Glebe was here you might miss it. A smart yet plain green gate glides open to reveal, on the left, the front of the redbrick former school, which now features finely worked vertical bands of windows rising to 60ft, with Portland stone lining and containing 360 panes of glass. Oversized bronze plant pots, custom-cast by the foundry Bronzino, create a sense of arrival. Only, to where? The detached villa to the right, screened by trees, has an elegant midcentury Californian feel. Look closer at the cobblestones leading to the main building and it becomes clear that someone has hand-sculpted each stone, of which there are thousands. The fine porphyry stone setts are subtly arched and took installers two months to lay. 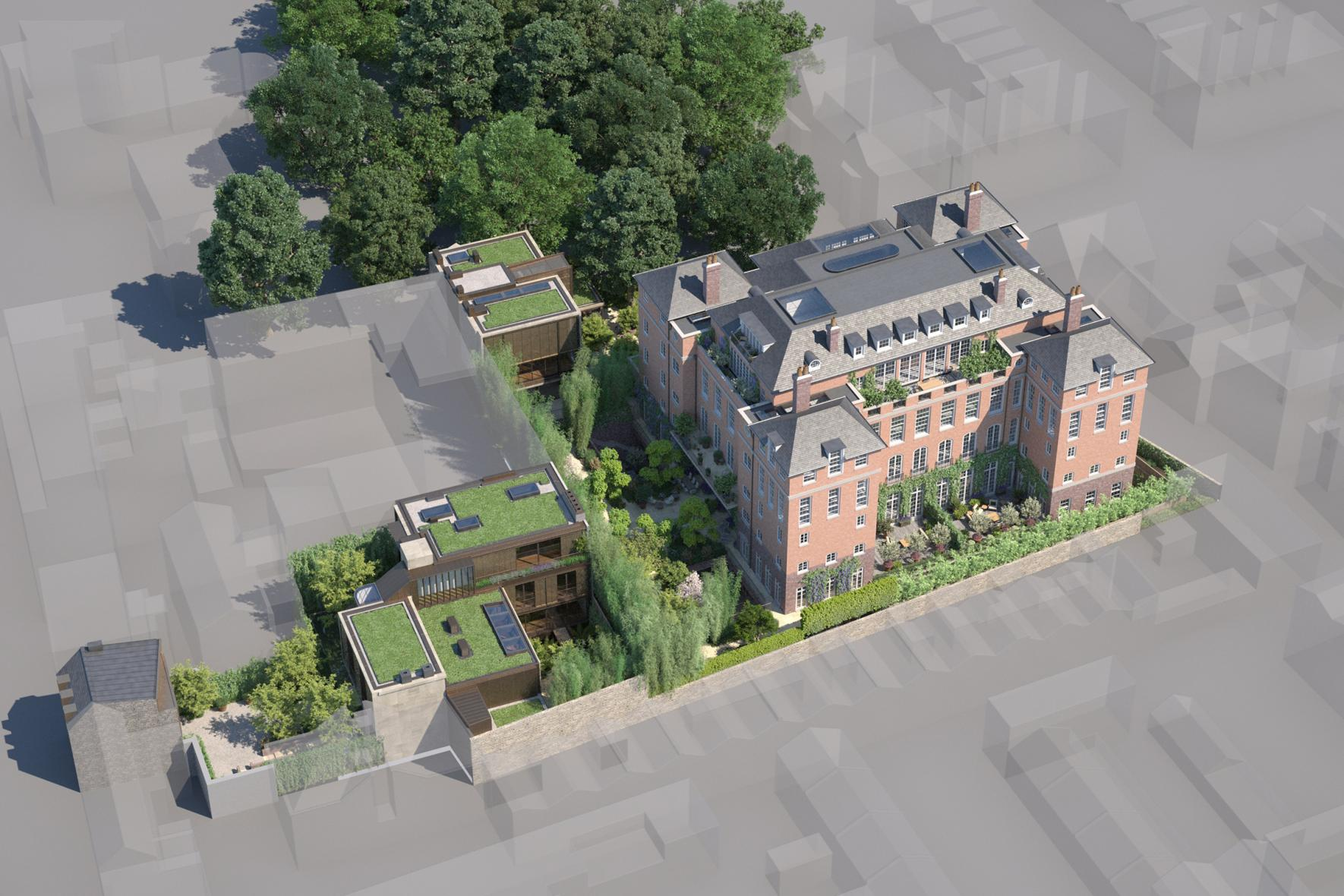 An aerial view of the Glebe

For a further taste of what the Glebe is really about, consider the sumptuous rug in the drawing room of the penthouse that occupies the entire top of the main building. The rug weighs nearly a ton, so it was craned into this 15,000 sq ft double-height unit (rumoured to carry a price tag of £100 million). Handwoven in Nepal, the rug took more than a year to create. The Nepalese workshop worked only on this rug. It had to be air-freighted in three sections before being hand-stitched back together on site. And yet, quite possibly, the eventual occupants will have their own rug that they wish to roll out.

“These residences were conceived as long-term homes, so it is only natural that owners will want to make them their own,” says David Salkin, a director of Orion, the developer and the main company leading this new definition of luxury. “Our goal was to create a world that is uniquely adapted to the needs of clients accustomed to the best of the best. It is relatively straightforward to create a luxury development with lots of similar units. Creating this kind of uniqueness at every level not only takes time, but also requires an array of artists and craftspeople, money, of course, and a great deal of thought and co-ordination.”

The Sunday Times has been granted exclusive access to the starry cast of architects and designers involved. A different “named” designer was commissioned for each residence: Anthony Collett; Mlinaric, Henry & Zervudachi; Studio Reed; Richard Collins; Douglas Mackie; Peter Mikic; and Jean-Louis Deniot. Most striking is that many of the designers interviewed say that there is no other project they have experienced quite like the Glebe.

As well as being the interior designer of one property, Anthony Collett was the design architect for the main building (Philip Gumuchdjian did the villa and the townhouse). “Cubitt’s Belgravia or Nash’s Regent’s Park is grand theatre with everything put on display, whereas old Chelsea is far more hidden away and discreet,” he says. “People here are secure in themselves, at ease with their wealth. There is a magic and an energy about the place — something eclectic and lyrical.” 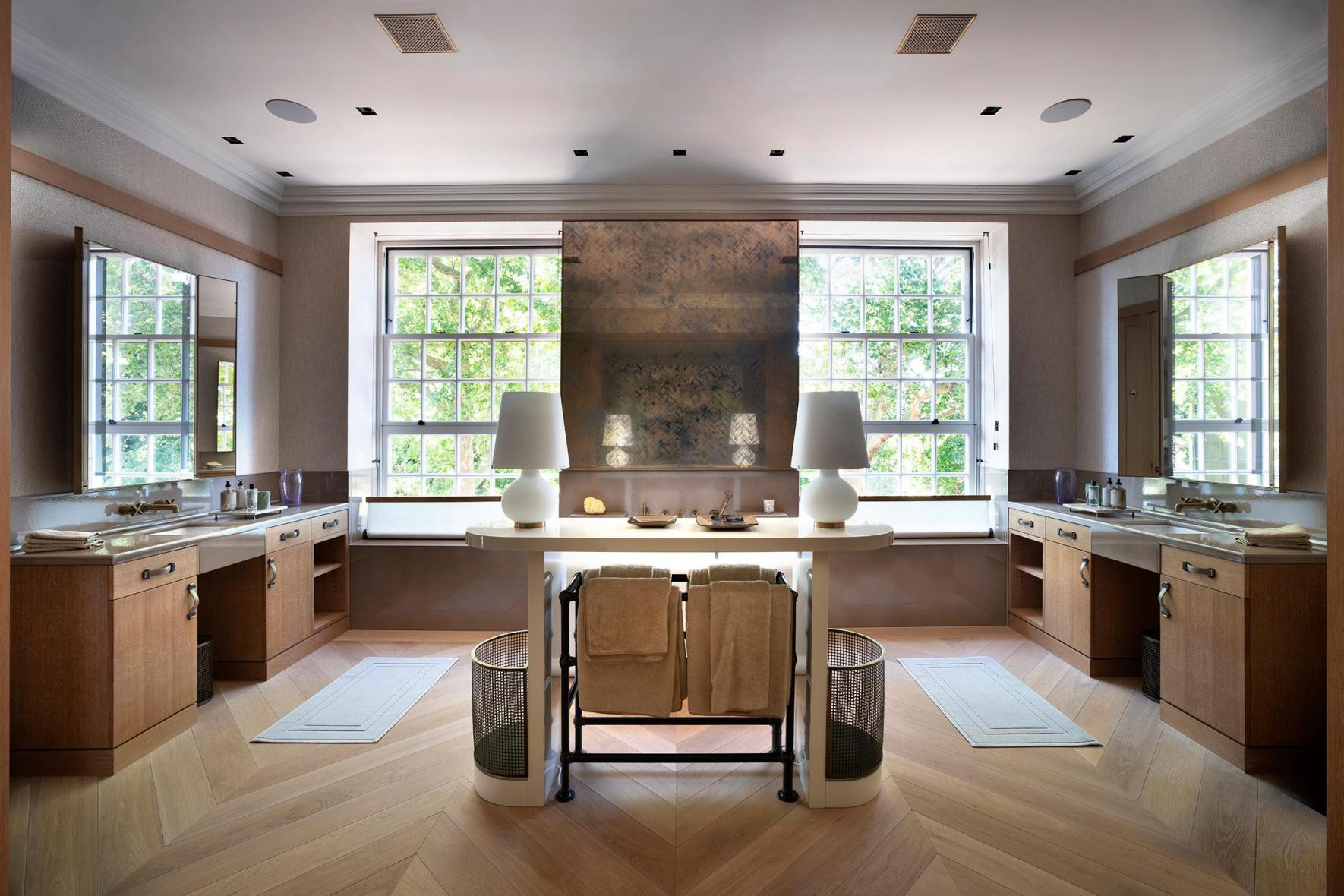 The landmark redbrick building blends in with the surrounding older brick Queen Anne homes and 19th-century artists’ studios, so an early decision was made to retain much of the frontage. The interior was then gutted. Collett married the new roof (housing the double-height penthouse) with the original façade. Four “turrets” at the corners complete the 19th-century design, and also shelter 900 sq ft of terraces with views of the river.

At the bottom of the building, a three-level basement contains four swimming pools (the penthouse includes a 16-metre pool and spa area accessed by its own lift). Digging down so deep near the river, below the water table, presented engineering challenges, plus the need to consider neighbouring residents, especially given the narrow streets. Such a basement would not be granted planning permission in the borough of Kensington and Chelsea today; it is the last of a kind. “A huge amount of care and attention went into orchestrating construction traffic,” says Salkin. “We even had a vehicle-washing facility built to spray away any dirt from the undersides of each truck leaving the site.”

“The Chelsea setting held us to a certain standard too,” quips Tom Stuart-Smith, who landscaped the site. He has won eight gold medals at Chelsea Flower Show and three best in shows. “A few streets over you have the Chelsea Physic Garden, founded in the 1670s, with some of the most extraordinary rare species in the world. It sets a high bar.”

The landscaping challenge was to make the communal green spaces a continuation of the gardens attached to the ground-floor apartments and the villa — whose privacy had to be assured — without creating barriers or walls. The solution was to layer foliage over 65ft distances. 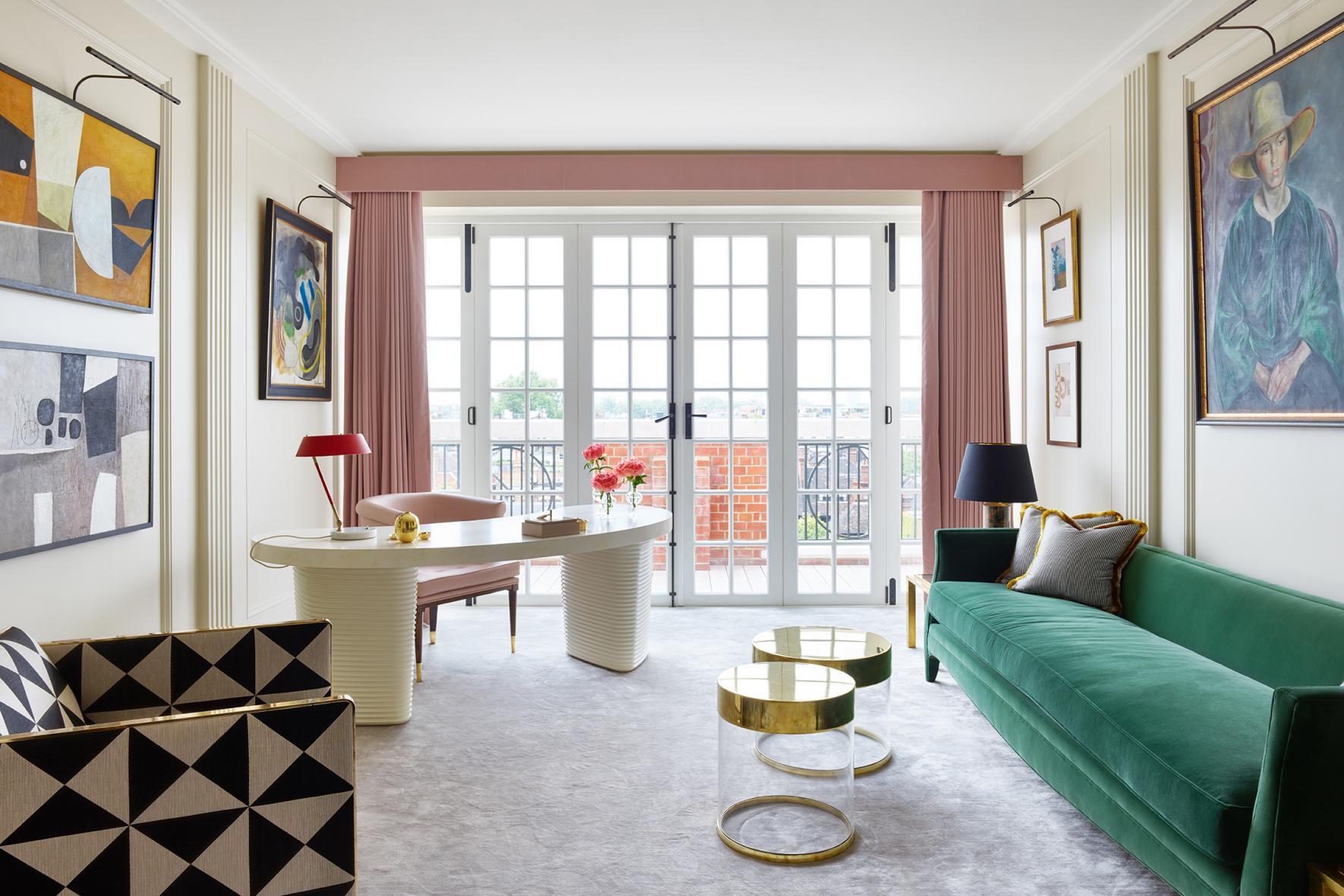 A study by Peter Mikic

Stuart-Smith favoured non-native species that thrive in the increasingly warm London summers — honey locust trees, American pin oaks, magnolias and olive trees. The long gestation of the project enabled their maturation. But there was also a Shangri-La-like quest for certain species. “We wanted some huge spectacular bamboos, and legend had it that a nursery in the south of France could provide them. Eventually we tracked them down to a beautiful site near Avignon.”

The results are extraordinary for a central London address. With some vistas, foliage extends as far as the eye can see. You could be in Hampshire, or Devon. “A lot has been made of people leaving the city for the countryside during the pandemic,” observes Ed Lewis of Savills, “but what you have to understand is that, at the top end of the market, buyers remain attached to London’s infrastructure. Several of the world’s leading specialist hospitals are within a mile of the Glebe. It’s the best of both worlds: the ultimate in gated security, yet in the villagey world of old Chelsea and surrounded by private green space. There is nothing else like it on the market.’

One of the lower-floor apartments has 9,000 sq ft of private garden. It is a duplex, with its own pool and five-metre-high ceilings. Everywhere the eye travels is something beautiful, rare and inevitably handmade, reflecting the “total design” spirit of a former neighbour, Charles Rennie Mackintosh. Hand-laid parquet flooring anchors walls of faceted glass; light dances off silver leafing.

The list of artistic features is unending. Arrive in the penthouse and you find yourself in a corridor of walnut with gloss applied in so many layers that it resembles glass. The penthouse’s designer, Peter Mikic, has worked extensively on luxury yachts. The specialist cabinetry company Halstock, which made the panelling, also created doors for a cocktail bar using two contrasting walnut veneers intricately arranged to create starburst patterns, requiring hundreds of hours of labour. 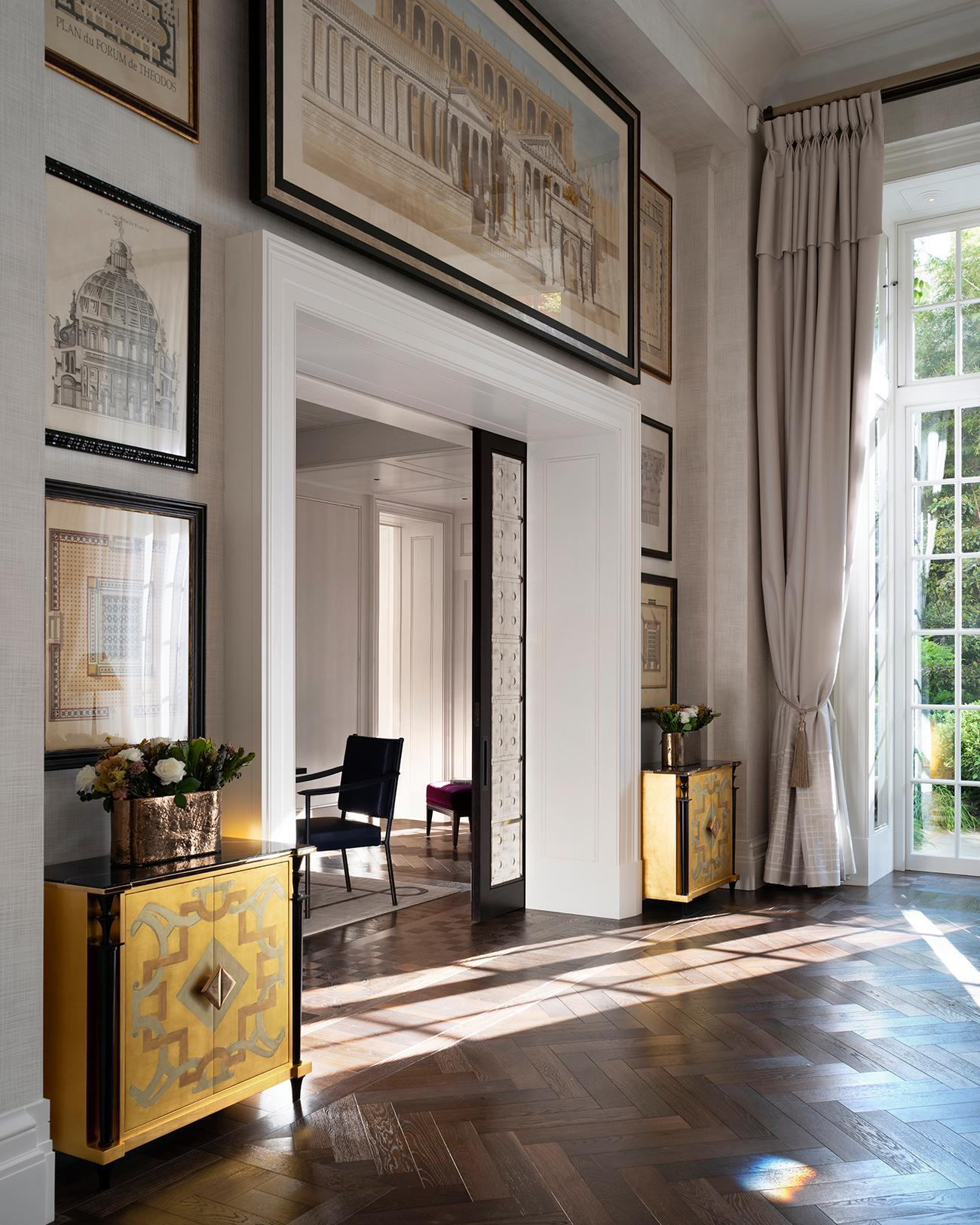 A drawing room by Anthony Collett

Silver-wave marble for steps came from a single block uncovered in India. Plaster on the walls has been hand-scored. The 19 hand-blown Murano glass lamps floating above the dining room table contain 22-carat gold leaf.

The project supported specialist craftspeople and artisanal workshops, and yet it is what the eye doesn’t see that proves to be among the most impressive features of all.

Formation Architects is the practice behind all these designers. It has worked on some of the highest-profile residential projects in London, including the historic Dudley House at 100 Park Lane, now owned by Qatari royalty. “Given that every unit and almost every feature at the Glebe is unique, thousands of technical drawings had to be created so that everything was thought through,” says the director Kees van der Sande.

One issue with five-metre-high ceilings is the volume of air that needs to be moved and conditioned. It also needs to be done seamlessly, for comfort as well as for the protection of valuable art works and finishes. Vast fan coil units run at a fraction of their capacity. “Even in the most exclusive apartments, you may experience a “waterfall” of cold air or a hot zone,” says Van der Sande. “You will not experience that at the Glebe. You will not see access panels or control switches or grilles. It is the way in which things have been made to disappear there that sets the Glebe apart. It feels unconsciously resolved, right. You feel at home, at ease. This is the essence of luxury.”

One man very much at ease in this world is the rock-star interior designer Jean-Louis Deniot, who designed the villa. The Parisian has worked extensively in Belgravia and is now working on Cambridge House, the former premises of the In & Out Naval and Military Club on Piccadilly. But even then the Glebe stands out.

“It was unusual to find such a pristine contemporary, freestanding structure [the villa] in such a classical setting,” he says. “I also found the locale to have a huge amount of personality. One element that excited me was the light. I was determined to make the most of that.” 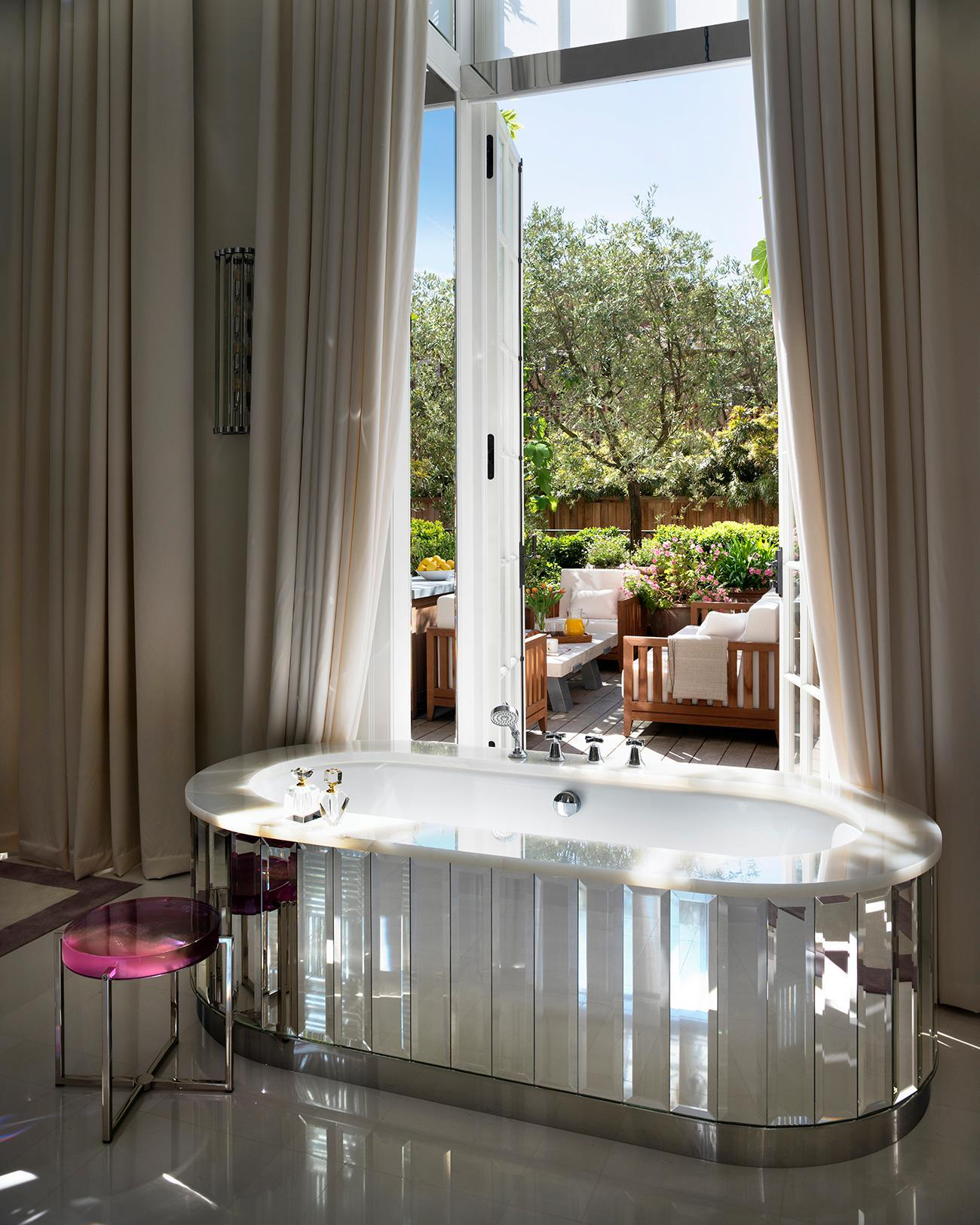 A bathroom opening out onto a terrace

The soft, liquid light in the area has attracted artists including Turner and Whistler. One wonders what they would think of this villa, in which a vast “guillotine” sliding window — the largest of its kind in Europe, weighing more than two tons — streams light into the rooms above ground.

Below ground is a double-height basement featuring another swimming pool, however, and here Deniot’s ingenuity would be tested. He wanted to avoid any sense of enclosure, while diffusing light by using surfaces that were “reflective not reflecting”. The result is a gorgeous curve of organic-looking, subtly backlit flat panels, sloping up from one end of the pool. At the far end is a frosted mirror.

This creation went on to win Deniot the commission to revive the Waldorf Astoria in New York, but you sense that a piece of his heart was left in SW3. “In the end it is like owning a beautiful piece of sculpture,” he says. “Only one that you can live in for ever.” 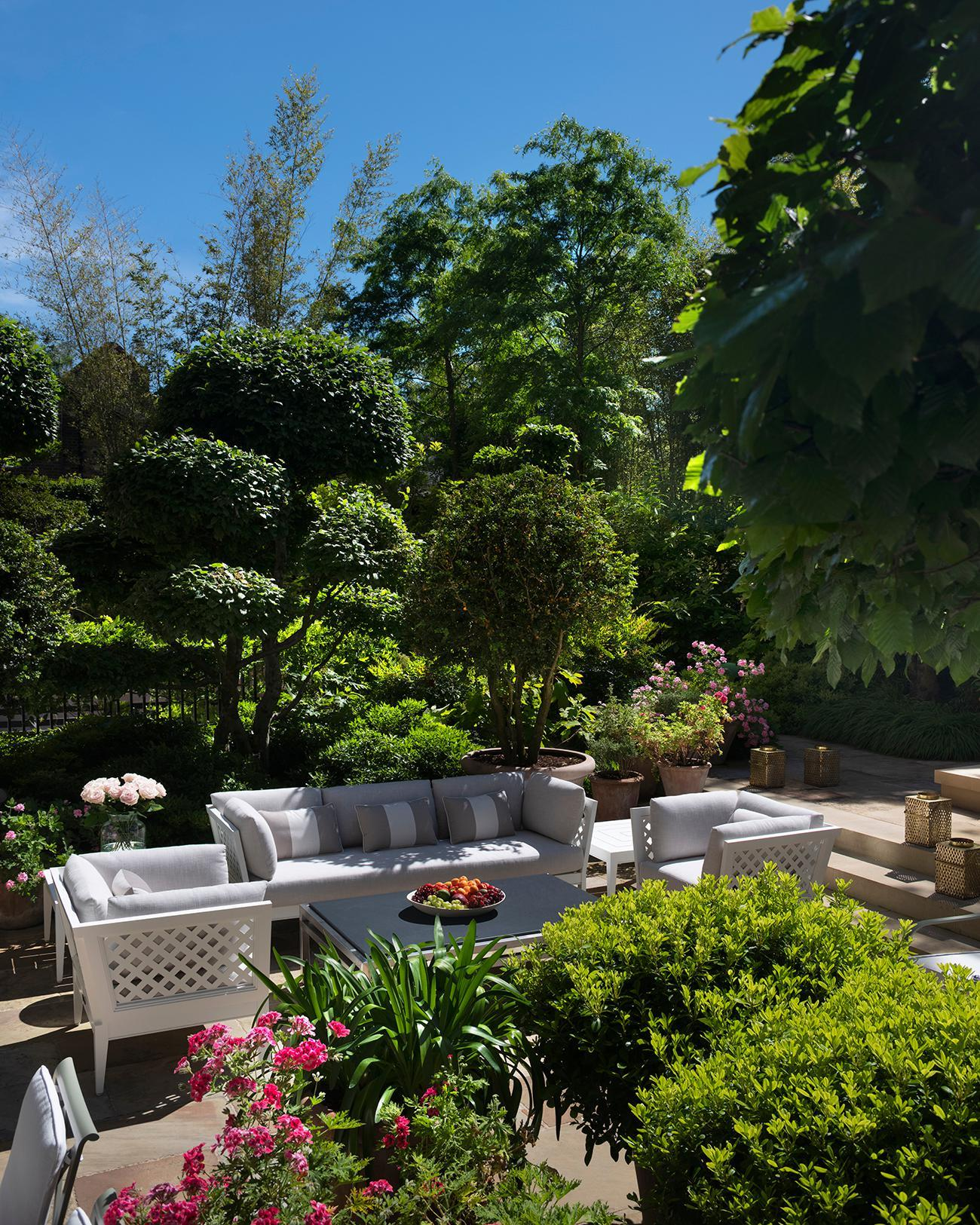 How it was built

● Built in a Victorian school in the oldest part of Chelsea, it comprises just eight ultra-luxe residences ranging in size from 5,000 sq ft to 15,000 sq ft

● Plants within the garden, including a bamboo that can only be found in a nursery in the south of France, have been carefully grown over several years

This article was originally published in the Sunday Times

Keep in touch with us

Want to find out why investors see apartment blocks as an attractive investment? Read more in our interview with… https://t.co/dBhUJsrSIO

This year, Bold & Reeves has teamed up with Ludgrove Property to bring clients a unique insight into prime property… https://t.co/2frEwM5xJe

All our partners adhere to strict health and safety regulations. Every one of our staff, clients and partners recei… https://t.co/IH6Bx0DE0N

When a client joins Bold & Reeves, they are assigned a dedicated property management team who they can contact 24/7… https://t.co/fHjsr78ITs